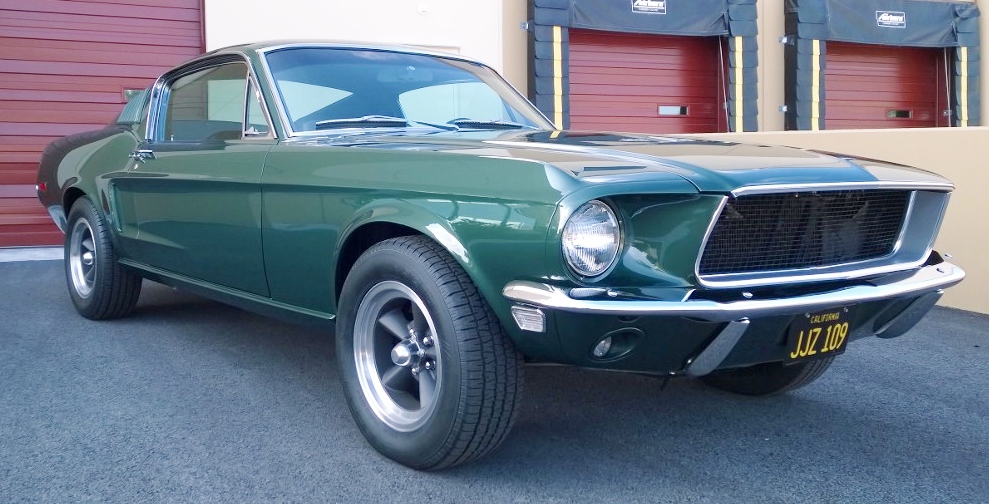 Example of how Hugh’s 1968 Ford Mustang GT could look when finished.

Shipping car parts can often be challenging for both retailers and customers; creating unnecessary hassle and making some purchases almost unviable That’s why here at Shipporter we love hearing feedback from our satisfied customers about how we were able to help them overcome the challenges often associated with shipping large products and deliver as promised.

On of our long time customers from Victoria – Hugh – recently got in touch with us to let us know about his Shipporter experience and also gave us a progress update regarding his 1968 Ford Mustang GT rebuild.

Here’s what he had to say:

I bought this 1968 Ford Mustang GT fastback from NY State in July 2015, shipped it from the port of NJ and finally got it home in early 2016. I’ve been working on it steadily since then. 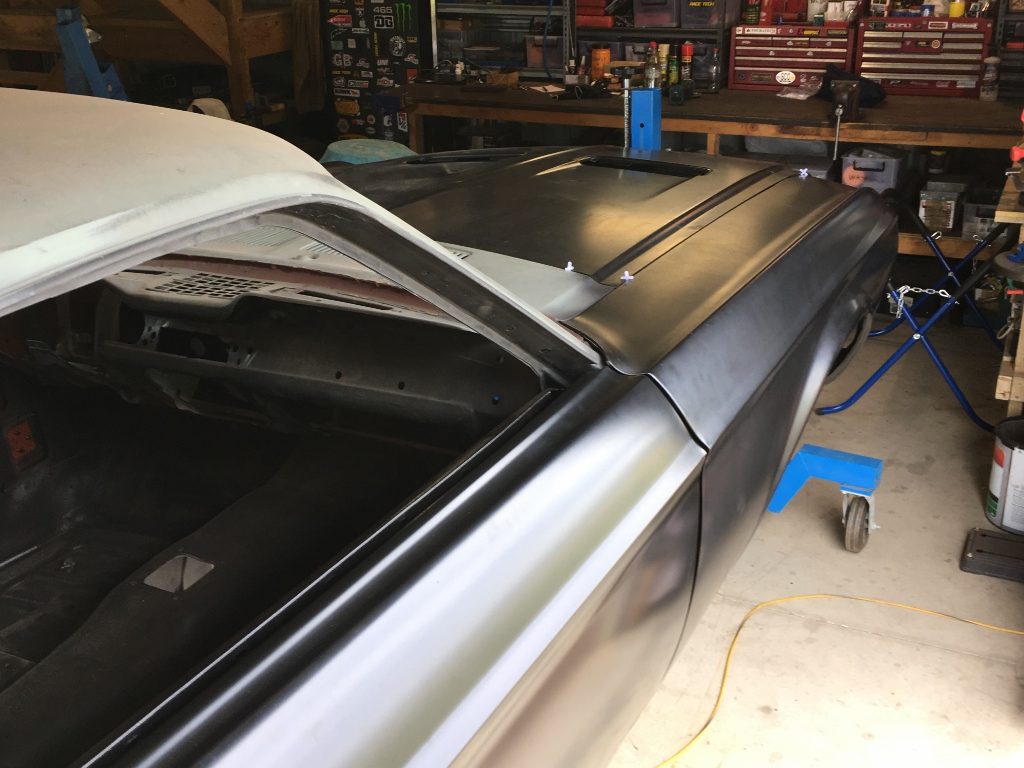 What I Started With

The MARTI report revealed its delivery specs in 1968;

So it even had the rare headrests (upwards of $1K for a good genuine pair!) and the then new AM/FM stereo F8TBZ radio (which I have – yippee!), although I am fitting a very accurate modern replica radio fitted with an iPhone adapter, so I can have all the convenience and entertainment we expect these days and store the OEM away for safe keeping.

It would have been a very nice car in my opinion, if you could handle the bubble gum colour! I’m still a bit conflicted over this part of it. Numbers correct, nice, 68′ S code Mustangs aren’t exactly common and the prices for properly restored ones are climbing. Plus this being well spec’d I am tempted to go original, with maybe practical, not so visible upgrades.

However my wife can’t stand the Gulfstream Aqua colour so to keep the peace I’ll stay with my original idea and build it as a Bullitt movie car replica. As my car is an 68’ 390 GT fastback with a black interior, its very similar to the cars Steve McQueen drove, differences being the transmission and colour. A lot of time has been spent researching those 2 Bullit Mustangs. The story being that one was crushed after filming and the other was hidden in a Kentucky barn. Aficionados may be aware that both of them have recently been revealed to the world. Coinciding with Ford’s release of a new Bullitt Mustang. A few guys have tried to convince me to keep it stock, but it seems the Bullitt is the goal, whilst keeping all parts I change for posterity. 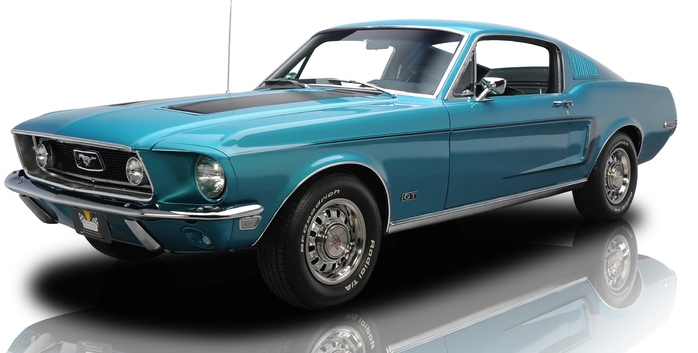 I actually don’t dislike the OEM colour that much. It looks quite striking with black hood stripes and maybe even a set of Torque Thrust TT-D wheel’s. But in the end, it’s a happy wife and all that…

The car was bought as a mostly disassembled project, in primer paint. The rebuild started in the early 1990’s but the previous owner had lost interest. The good thing about that was most of the new yet to be fitted sheet metal was genuine FORD from 1993, still all in the factory boxes (better than often ill-fitting repro panels). This included a new hood, trunk lid, front fenders, and both valances.

The bad thing was some parts were missing, despite claims from the seller to the contrary…Caveat Emptor as they say. The car was sent by a shipping agent not connected to Shipporter, and unfortunately received some damage in transit. This included destroying the original, mostly rust free, RH door. A pity. Lesson learned, there is NO such thing as a good, cheap shipping agent! 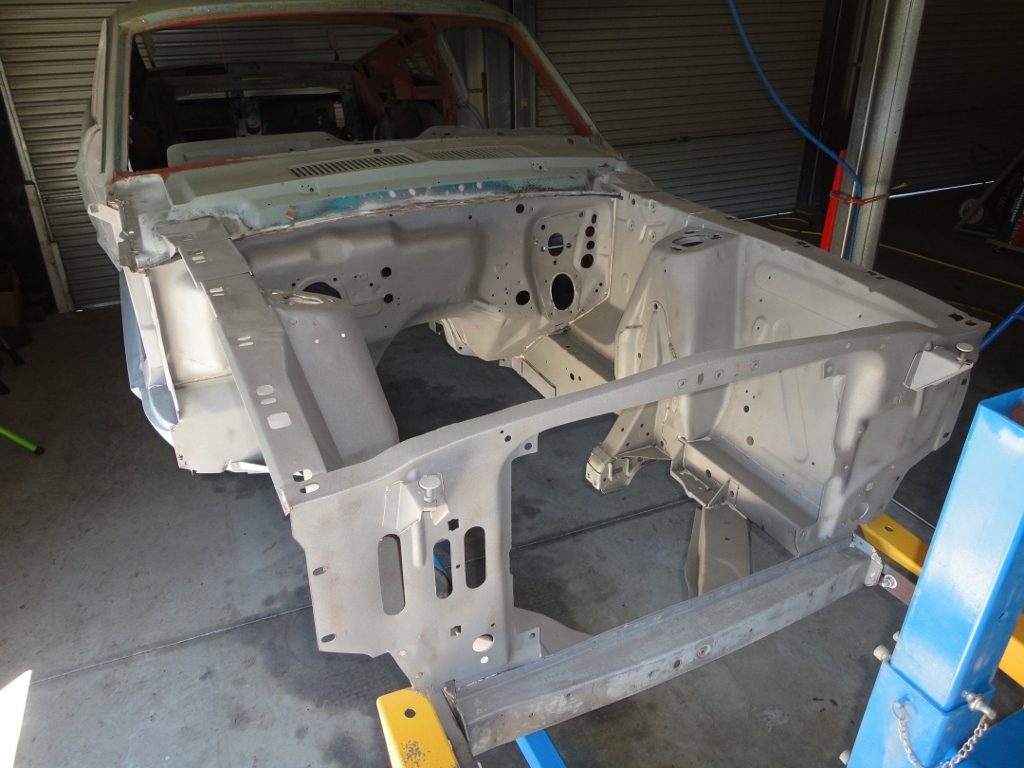 Anyway after much unpacking and cleaning a list of parts was created and this was where Shipporter came in. As is often the case with restorers of classic or vintage cars, any parts not restorable to as new condition were replaced where possible (anything with correct numbering was retained however). For a high performance, well equipped car like this, it means A LOT of parts being bought. Most of them stateside, not just because of the expected cost of local stock, and in many cases, the fact that as an S code car, some parts are too rare for Aussie retailers to carry. Fair enough.

I also added some new systems to suit its life on the road here in OZ. A new AC system by “Perfect Fit” and a new complete 5 speed “TKO” manual transmission kit from Modern Driveline, giving relaxed cruising and improved economy. Both bulky shipments involving many heavy boxes…

Whilst small shipments for odds and ends orders were often cost effective by USPS or UPS, anything of weight and significant size went Shipporter’s way. 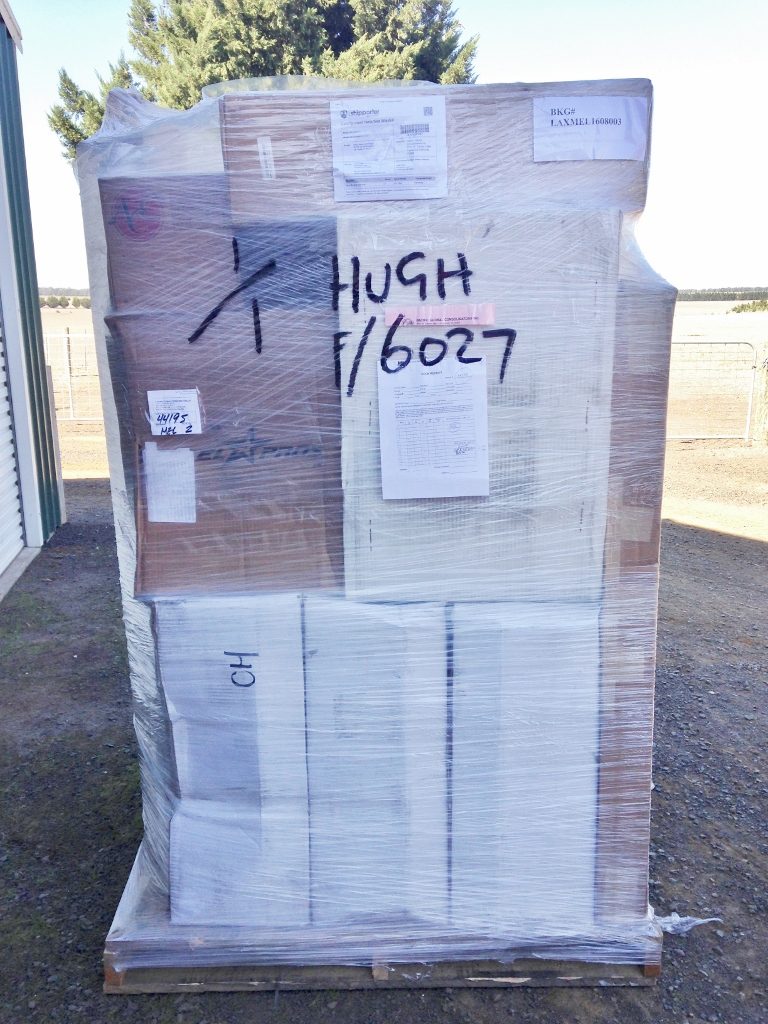 Part of the shipping damage included the rear floors, where engines and differential heads have been dropped by the car loaders in NY. So the car went on to my rotisserie for some surgery. The rear floors have now been done, amongst other things, however it’s still there as I fit and gap the new front panels. The aim is for a better panel fit than Ford provided. This takes a lot of time, adding and trimming metal, fitting, removing, and re-fitting etc.

Some visible progress has been made in that the driveline has now been completed and all suspension and steering parts readied for fitting. A complete new deluxe (wood trim) interior and set of refurbished instruments is also ready to go in.

Another upgrade is the fitting of a Borgeson power steering system. My car had factory PS however its rather vague and prone to leaks. Steering wheel wise I was lucky enough to find a genuine 67’ Shelby 3 spoke F.I.V. wooden steering wheel. Very rare and as per the movie cars. 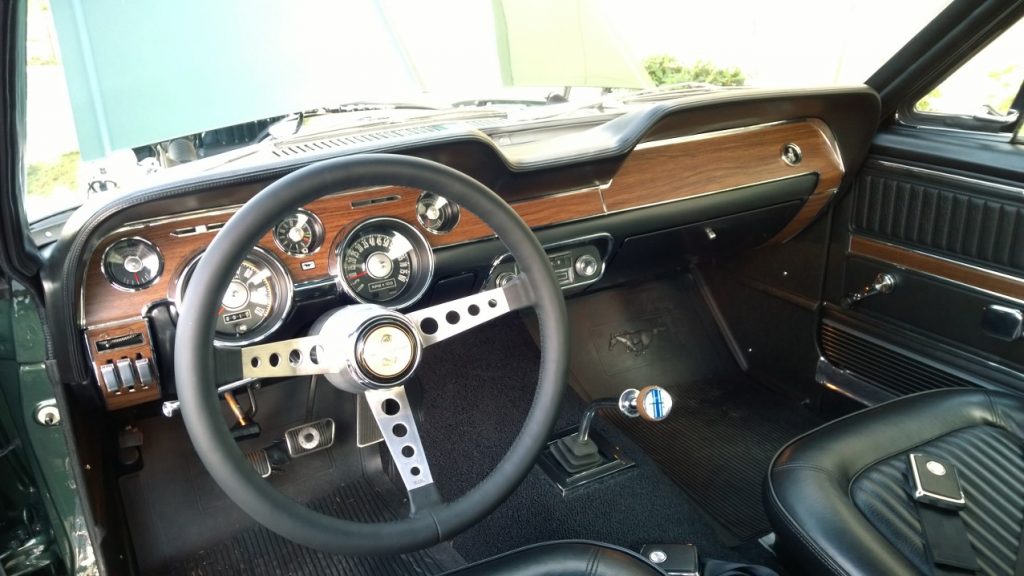 Motor wise the upgrades done on this build were:

This should help the old girl produce a little more than the factory 325 BHP. 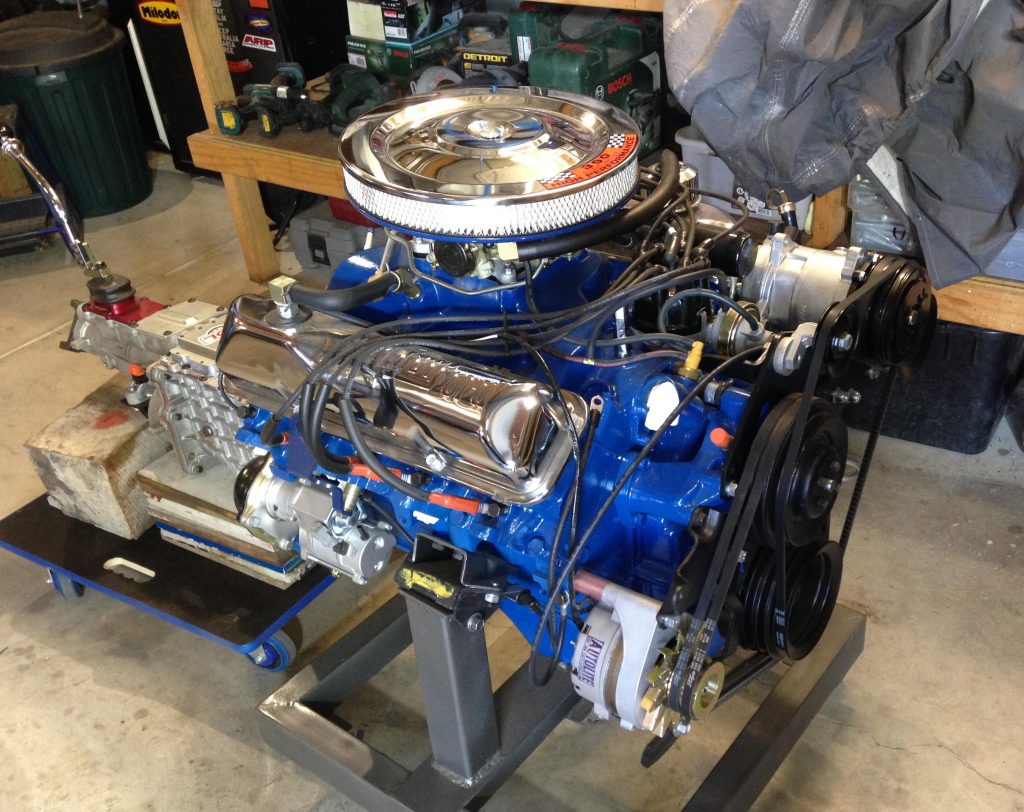 The idea has been to restore to OEM in most cases, but upgrade where in keeping with the car. So it’s a mixture of concourse correct restoration and resto modding for daily driver appeal. So far its been good fun. Anyway I still have plenty to do and no doubt more parts to ship…

Meantime my kids enjoy hiding in the bodywork. 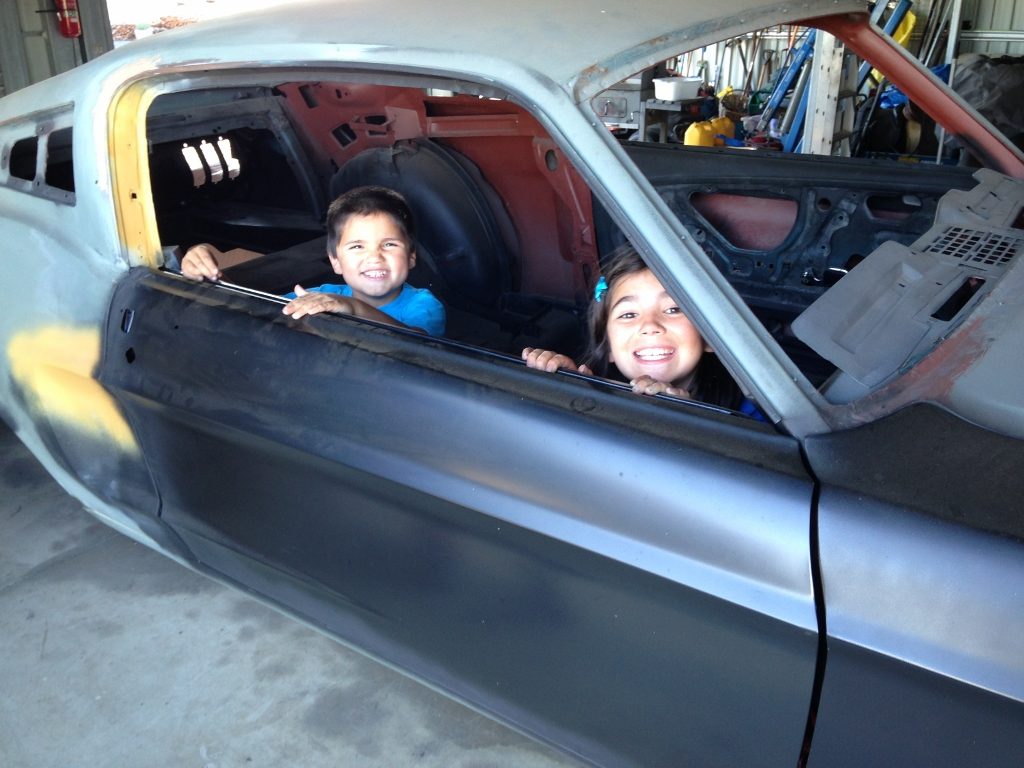 Thanks to Hugh for filling us in with your progress and we can’t wait to here more about your impressive rebuild.

If you’re looking to ship car parts or you have a large overseas shipping order in need of delivery, contact us today and start your own success story.